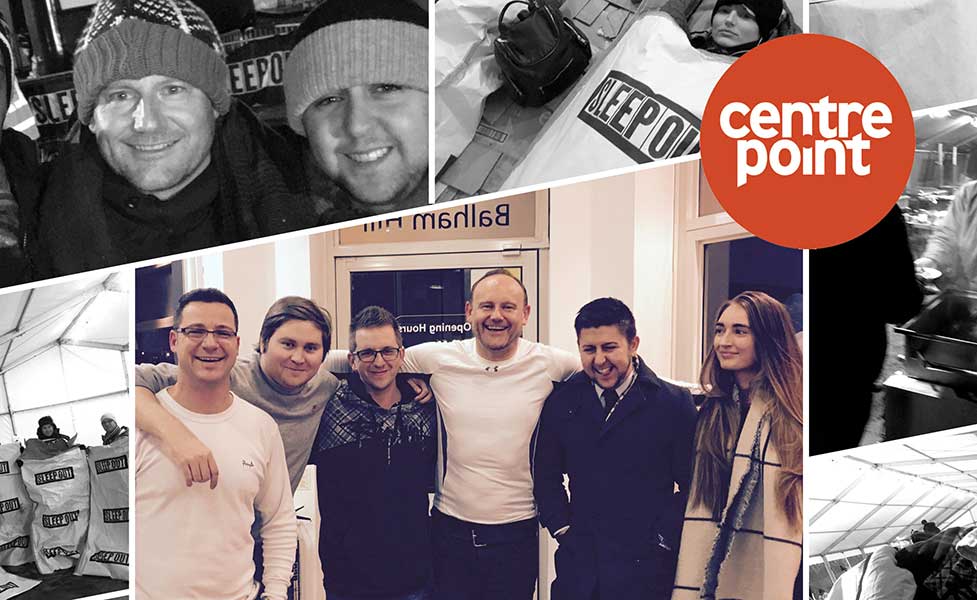 On the 24th November 2016, the Samuel Estates team joined over a thousand Centrepoint supporters who gave up their beds for a night to sleep out on the streets of London to raise money and awareness for the homelessness crisis in London and across the UK. We were joined by celebrities including Lady Kitty Spencer and Centrepoint Ambassadors Sara Cox and Colin Salmon.

Why we decided to take part

An estimated 25,000 young people are at risk of homelessness at Christmas, and throughout the year.

Sleep Out offers just a taste of the stark realities of homelessness – the biting cold, the damp, the noise and the difficulty of carrying on your day with little sleep –things which the event’s participants rarely if ever face in their everyday lives.

Paul Ahearn said ‘This is an amazing cause to support and it just highlights all the creature comforts that we take for granted’. Sponsored by Greenwich Peninsula and Forsters LLP, Sleep Out was held for the first time on the banks of the Thames between London landmarks Canary Wharf and the O2 Arena.

Liberal Democrat Leader, Tim Farron MP, braved the cold as well as groups from Centrepoint’s corporate partners. Teams including senior staff from the global media agency, MediaCom and advertising agency Ogilvy & Mather were among those bedding down for the night.

This year’s sleepers were entertained by a live performance frompoetHussain Manawer, short films from Secret Cinema, a workshop with a Centrepointyoung person and a bedtime story read by ChristopherBiggins.

The team who braved the conditions of a freezing November night with nothing but a sleeping bag and a cardboard mat managed to raise over £3,000. The Big Sleep Out was a huge success, raising over£40,000. The money will give more homeless young people a warm, safe place to stay and help them to move forward in their careers and education.

Richard Utting, Head of Events at Centrepoint, said, “We’re so grateful to everyone who gave up their beds to raise money and awareness for the crucial issue of youth homelessness.”

“It’s a scandal that in the 21st century there are still young people in the UK left with no option but to sleep rough and face the threat of violence, the elements and an uncertain future.”

We're pleased to announce our involvement with the Landlord pledge set up by Wandsworth Council As...

The festive season is here! Samuel Estates sponsors this year's event and raises over £600 for...

Lawrence Austin ran the Virgin Money London Marathon 2021 this past weekend in support of Sarcoma...